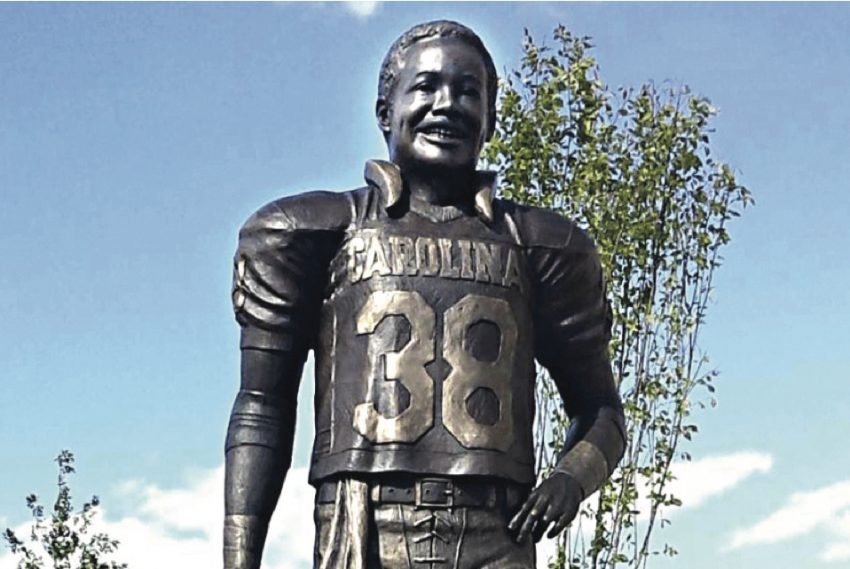 It’s the “Dog Days” of August and you can be sure that the upcoming college football season is on the minds of many South Carolinians. Former Gamecock Head Coach Steve Spurrier refers to this time of the year as the “talking season.” This is also a time when everybody’s favorite team is undefeated and their fans are predicting great success for the upcoming season.

While Clemson has won 2 of the last 3 National Championships, the University of South Carolina fans still recalls fondly what was probably the single best individual season for any South Carolina college football player. In honor of George Rogers’s 1980 Heisman Trophy win and his Hall of Fame career, the University of South Carolina has erected a statue of Rogers in the plaza outside of Williams Brice Stadium. The statute contains the inimitable George Rogers’s grin and he is usually found nearby prior to most Gamecock home games signing autographs and posing with his trophy.  Below is the wording of a plaque on the statue honoring Rogers: 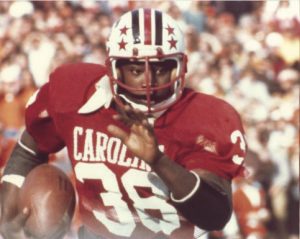 George Rogers enrolled at the University of South Carolina in 1977 and became one of the greatest football players in school history. In 1980, Rogers was the first Gamecock to receive the Heisman Trophy and holds the distinction of twice finishing in the top 10 in Heisman Trophy voting. During his career at Carolina, Rogers rushed for 5,204 yards, gaining more than 100 yards in each of his final 22 college games. His 31 career rushing touchdowns and 202 career points broke SC records and rank among the most in school history. Rogers was a first-team All-America in his junior season and a consensus first-team All-America in his senior season. His jersey number, 38, was retired during halftime ceremonies at Carolina’s final 1980 home game. The New Orleans Saints selected Rogers as the first overall pick in the 1981 NFL draft. He was the NFL Offensive Rookie of the year in 1981 and was a Pro Bowl selection in 1981 and 1982. He won the Super Bowl as a member of the 1987 Washington Redskins. He is a member of the New Orleans Saints Hall of Fame, the University of South Carolina Athletic Hall of Fame, and the College Football Hall of Fame. Rogers’s impact in the Columbia area continues through the George Rogers Foundation, helping students achieve the success that he attained during his years at Carolina.