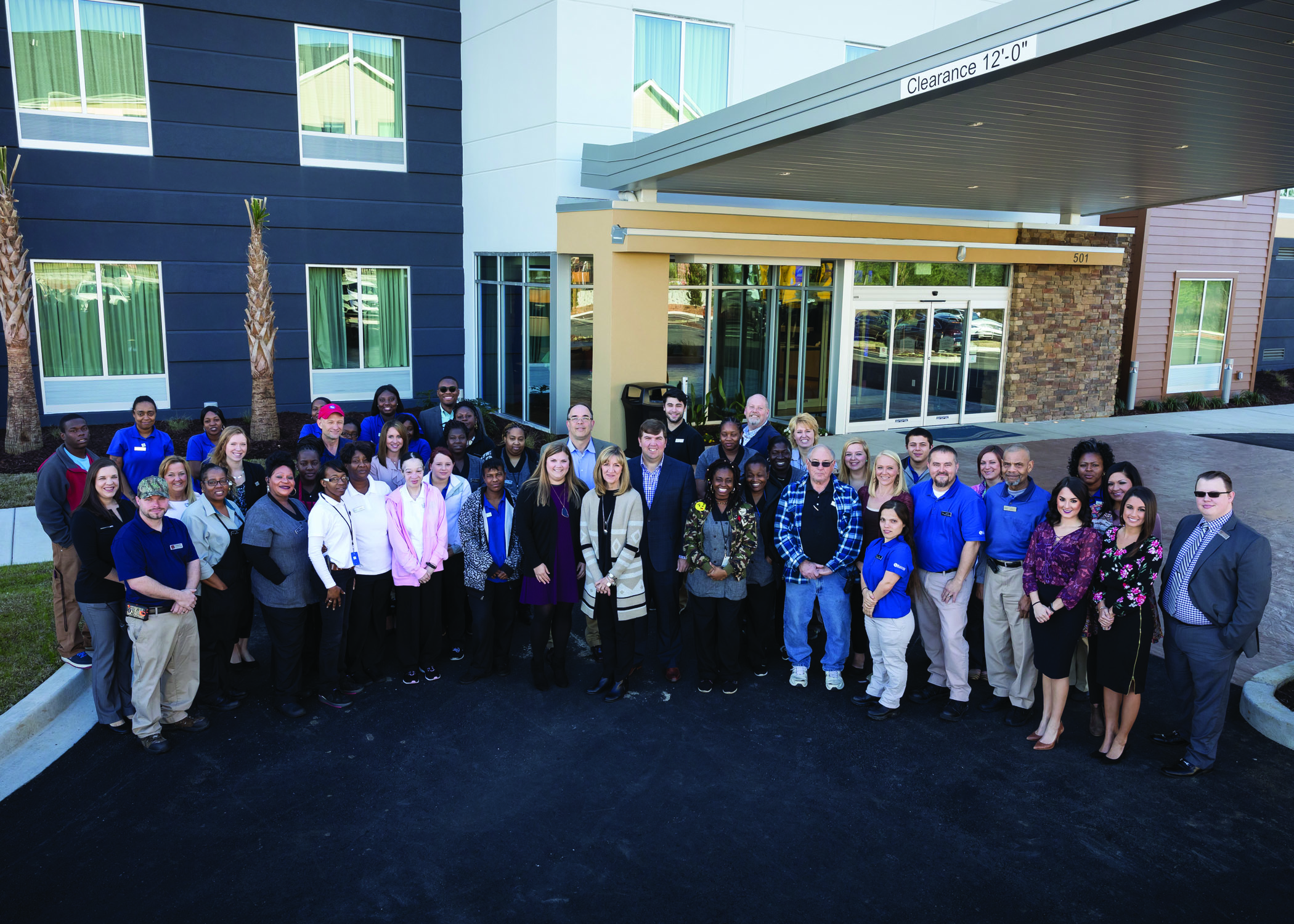 Hospitality at its Finest

Before this age of instant information, the best way to figure something out was to go see for yourself. That’s why on any random night in the late 80’s, a car loaded with Mark and Chrisie’s young children might be seen driving in and out of hotel and motel parking lots in the city of Florence; the task was simply counting cars. Mark Raines, a budding entrepreneur, was questioned by his young brood, wanting to know what they were up to as they continued to drive in and out of parking lots…counting. He told his youngsters that he had dreams; plans to build a hotel. They, like most people, were baffled. “Why, dad?!” they squawked, “No one wants to stay in Florence!” Mark drove on, quietly grinning his all-knowing grin. Maybe he grinned because he had a hunch about the massive industrial boom that would take place in the Pee Dee in years to come. Maybe it was because forward thinking had allowed him to see that Florence’s positioning, on two interstates, made it the perfect travel stopover. Or maybe, quite simply, he could sit back and smile because he drew inspiration from premonitions reminiscent of old baseball stories involving Shoeless Joe Jackson or “Moonlight” Graham in the 1989 iconic baseball classic. Whatever his reasoning, premonition or intuition; Mark Raines just knew. So he drove on and answered his little people with unwavering confidence, “We will build it…and they will come.”

The unlikely catalyst for what has quickly become the Raines Hospitality dynasty was none other than a single gas station. Rock’s Texaco Truck Center opened in 1969 out next to 1-95 on TV Road by the Raines family patriarch, Rock Raines. His young son, Mark’s brother, David Raines, spent the latter half of the 80’s working second shift at his father’s Texaco station. His days consisted of bussing tables, cooking food, pumping gas and generally filling in as needed. It wasn’t until the 1990’s that Rock, Mark, and David decided to go into a family partnership together by opening both Raines Food Mart and later on the Texaco Auto Food Mart. It was about that time that the family decided, on little more than a hope and a prayer, to try their hand at hospitality with the opening of their very first property, the Super 8 Motel. “I really thought we would be in the gas business full time. After going out on a whim and opening the Super 8, I had no idea that this would begin our hospitality journey,” David recalls.

Pieces of an entrepreneurial puzzle, destined for hospitality greatness, began to fall into place. David continued to focus his energy’s on the convenience store while Mark managed the Super 8. Mark had bigger plans for the hospitality side of the family business, dreaming of one day opening a Marriott branded property. Conducting his own research, he endlessly polled those traveling on business to find out where they preferred to stay when out of town. It seemed that the hotel that was turning the heads of traveling professionals was none other than the Courtyard by Marriott. After some exploration of several other hospitality ventures, in 1998 the Raines family opened the very first Marriott property, the Courtyard by Marriott. The rest is history as other financial partnerships and friendships have continued to grow the Raines Hospitality portfolio over the past 19 years. What started out as a few gas stations has quickly grown into a hospitality empire that will soon feature nine different hotel properties, over three different premiere brands, in three different cities by the end of 2017. David remarks, “Though there are many differences, I will always appreciate the similarities in customer relations between the gas business and hospitality. I never once thought we would be where we are now, but I couldn’t be more proud of where we are today.”

As the Raines family portfolio continued to grow, so did the next generation of Raines’ kids. Raines Hospitality epitomizes the true definition of a generational business with each of Mark and Chrisie’s four children, Grey, Will, Cadie (Snead), and Melissa, having worn many different hats in all the various departments at Raines Hospitality. From those experiences, they learned a bit more about the industry and have gone on to pursue careers within hospitality. Three of the four continue to hold positions within the company. While Melissa is not currently employed with RH, she took a position close to her roots with Marriott Corporate in a Revenue Management role. Within Raines Hospitality, Will currently has taken a position involving Finance, Cadie is working in the Procurement of Furnitures, Fixtures, and Equipment with Grey occupying his late father’s seat as President of Raines Hospitality.

Grey has an extensive history with the family company. Like his siblings, he too spent his high school and college years working in the Courtyard kitchen, picking up desk shifts, or assisting in the sales department. Grey continued to show a real interest and aptitude for the trade into his adulthood. With his father as his esteemed mentor, Grey has gone on to hold many professional roles including; SpringHill Suites Opening General Manager in 2003, Vice President of Development, and currently, President. Over the years he has cultivated a true propensity for development which has opened doors to amazing new partnerships. The most notable partnership achievement came from the formation of Springbridge Development where he serves as Managing Partner alongside Chris Scott and Jay Ham. After recognizing the benefit of developing turnkey properties from the ground up, Springbridge was born. They have since been an integral piece in the Raines Hospitality development process since 2012. They have also added other projects to their portfolio such as the Rainwater Building, Waters Building, and Berringer Building. Their partnership with Springbridge has allowed Raines Hospitality to experience exponential growth with no signs of slowing down! The shared pipeline boasts an incredible six properties, branded by Hilton, Hyatt and Choice and located in the Charleston, Columbia and Florence markets, over the next few years!

With the growth of new properties comes the inevitable growth of their staff. There is none too little that can be said for the amazing associates at any hotel property and the Raines family properties are no exception! Being in the business of providing world class care for up to 90 families or business travelers, at each property, on any given night is nothing short of miraculous! Not only do they provide impeccable service, but they do it 24/7. At these properties, this is the experience you can expect; every hotel, every time. With the small family like atmosphere and amazing teamwork, it is easy to see why these award winning hotels always come out on top. “It is so much fun to work with a true team; one that pushes each other to improve constantly. I am so proud of this team,” Grey says of the group. Raines currently employees 160 associates and boasts amazing lengths of employment with three associates having start dates dating back to the early days of Rock’s truck stop! One associate even predates that; Mr. Eldridge “Elvis” Stephenson has been a part of the Raines family since the 1950’s. VP of Operations, Ron Glancy, has 30 plus years’ experience in the business and has worked on and off with the family since 1989. Ron knows how challenging each day can be but says they have a lot fun too. “The absolute worst days in hospitality make for the greatest, most legendary memories. Those long days come together to make these amazing stories that just can’t be matched!” In addition to the day-to-day fun these associates have, the company works to promote that sense of family togetherness through different activities, contests, and the occasional appearance of their resident Elvis impersonator – VP, Ron Glancy.

What started out so many years ago as a father and sons team has grown into the hospitality giant that is vital in the Florence economy today. Over the past two years, the group received many awards including the 2016 Marriott Horizon Award, Developer of the Year award-Choice International, and the South Carolina Restaurant and Lodging Association Hotelier of the Year. In addition to these, Grey Raines was also named Business Person of the Year by the Florence Chamber of Commerce. If history is any indication of future performance, then we can expect nothing more than an incredible level of excellence in the years to come from home grown Raines Hospitality!