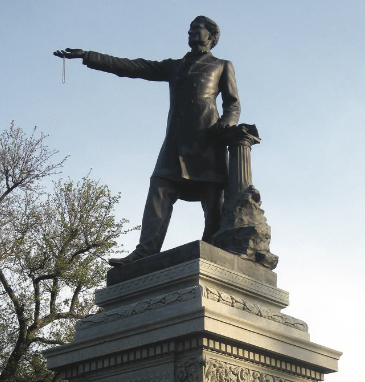 Throughout the South 21st century Southerners are revisiting decisions made by their 19th century predecessors to erect Confederate statues and memorials in public spaces. Opinions on the future of these memorials are as varied as opinions on the cause of the Civil War. Recently the New Orleans City Council removed prominent monuments of Jefferson Davis, General Beauregard, and Robert E. Lee. Some of the work was done under cover of darkness with workers disguised to hide their identities. The Charlottesville, Virginia City Council voted to sell their Robert E. Lee statue and rename the park where it stood. At Washington and Lee University, the school recently removed reproductions of confederate battle flags which hung in the campus chapel in which Lee’s tomb is located. The controversy is not limited to southern states as Ivy League schools such as Yale, Brown, and Princeton continue to address their institution’s historical ties to slavery and slave traders.

With the exception of the state house grounds controversy, South Carolina has generally avoided hostile arguments related to historical markers and monuments. Much of this can be attributed to the provisions of the Heritage Act which protect all monuments and memorials to all wars as well as African-American history markers from relocation, removal, disturbance, or alteration. The Act also declares that no streets, bridges, structures, parks, or other public areas dedicated in memory of, or named for, any historic figure can be renamed. Any proposal to remove or rename a memorial or change the name of a street, park or structure requires a two-thirds vote of both chambers of the legislature.

During the Civil War Florence barely warranted a spot on the map as there were only a few hundred residents. In the late 1940’s, the Florence Chapter of United Daughters of the Confederacy placed 4 monuments around town marking the purported scrimmage at the intersection of Palmetto and Church Streets, the Wayside Hospital marker at the corner of Baroody and Coit Streets, the Gambles Hotel scrimmage marker and the Stockade marker. The most prominent monument stands approximately 15 feet and was originally dedicated on April 21, 1882 at the original location of the First Presbyterian Church cemetery in downtown Florence. The Atlantic Coastline Railroad purchased the property in approximately 1905 and the monument and the remains of 64 Confederate soldiers buried there were relocated to Mount Hope Cemetery where they remain today. The monument’s simple inscription reads: Our Confederate Dead.