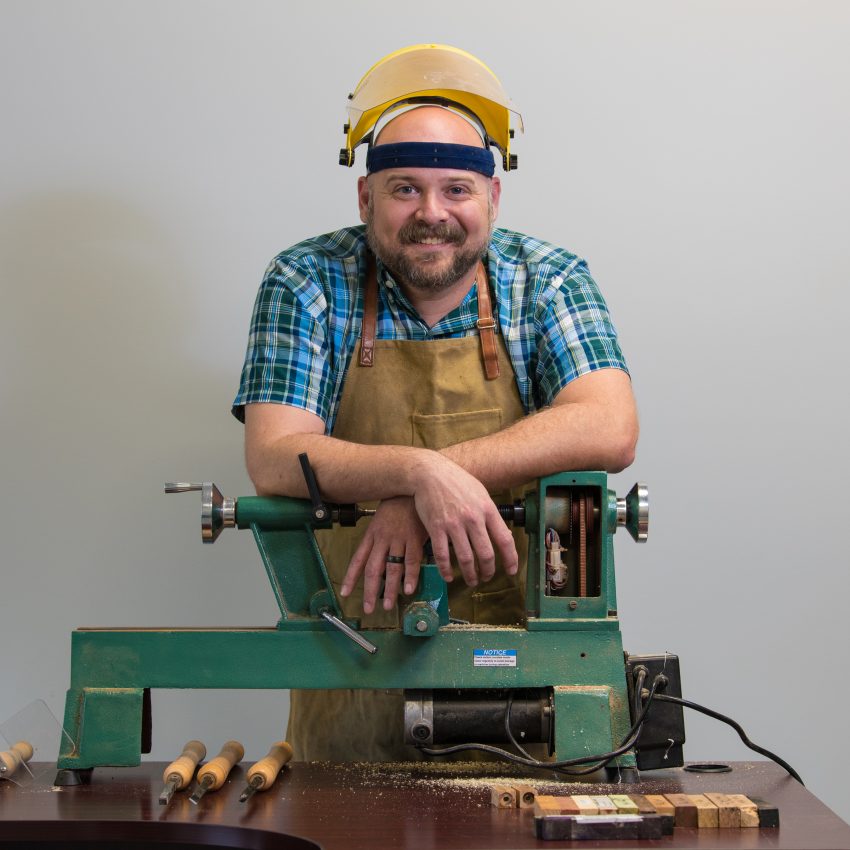 Even as a child, Franklin Brown was always more interested in how something was made than in the product itself. From toys and computers to engines and power tools, he was often found dismantling and then reassembling items that other people took for granted. 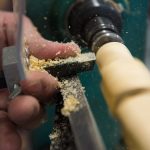 So, it wasn’t really unusual that when Franklin decided to try his hand at creating handcrafted wooden projects, like pens and bottle stoppers, that he also decided to build his own lathe for turning the wood. “Woodworking and lathe-turning have long been an interest of mine, but there was always an excuse to not get started,” Franklin said. “Lathes and woodturning tools can be expensive and preparing a project can take a long time.”

Still, he kept coming back to woodworking as a hobby, even creating wood slice platters and a few Adirondack chairs as he and his wife prepared decorations for their do-it-yourself wedding in October of 2018. After the wedding, he realized he missed the time he spent on the projects and decided to put excuses aside, creating his own lathe using a power drill and some creative manufacturing.

“There was some trial and error at first because it was hard to get the lathe stable enough to turn the wood safely,” he said. “There were some interesting initial outcomes, like exploding, flying wood that my wife didn’t think was too funny. After some adjustments though, I was able to produce some pens worthy of showing without getting a concussion.

“I found that I really enjoyed the process of taking a block of wood and seeing what it would become. Each piece of wood has its own unique markings and can be shaped differently just by the way I use the tools to carve it.” 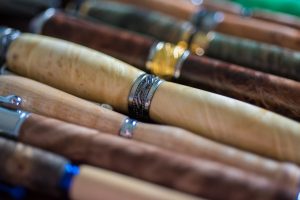 Created with natural woods ranging from oak to Australian burls and then polished to bring out the fine details of each piece, Franklin’s unique pens and pencils quickly became a hit with friends and family. As the holiday season approached, he began taking orders for gifts and soon realized that he would have to upgrade his equipment if he wanted to keep up with the demand.

The first step was purchasing better quality carving tools, which helped Franklin improve his skills and products enough to justify a Kickstarter campaign that would help him raise enough money to purchase a professional quality lathe. The campaign was successful, eventually funding at 176 percent of its goal. Backers of the campaign became loyal fans after receiving one of a kind pens and pencils created using the new lathe.

“That was when I realized that I may be able to turn my hobby into a side business,” Franklin said. “The new lathe made a world of difference in my end products, and I began delving into other types of lathe-turned products, like bottle stoppers, rings, bowls, and even knobs and handles.”

A second Kickstarter campaign that focused on pens and pencils made from rare Australian burl woods was even more successful than the first, funding at 311 percent, with several of Franklin’s original backers coming back to support the new project.

“The support has been amazing,” he said. “I never expected something that started as a hobby to turn into this. People ask me to make pens as gifts for family members and coworkers. It feels so good to know I have had a hand in helping make a special gift for someone. I even had a custom order where I turned an old hammer handle that had special meaning into a pen for someone’s father.”

Eventually, Franklin hopes to focus completely on custom orders so that he can continue to grow as an artist. Meanwhile, he has another Kickstarter campaign idea in the works where he plans to make pens using wood from trees that were destroyed during Hurricane Matthew in Bay County, Florida, where much of his wife’s family lives. The couple plans to donate the profits from the campaign to help support relief efforts in the region. 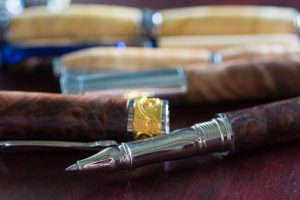 Find Woodworks by Franklin on Facebook or Instagram to see pens and pencils currently for sale, or message Franklin directly on either site for custom orders.